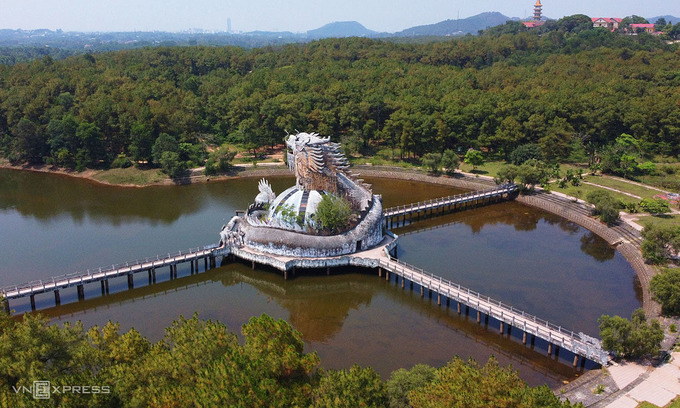 Thuy Tien water park on the outskirts of Hue. Photo by VnExpress/Vo Thanh

“Legend has it that three crocodiles lived here after it shut, survived on live chickens fed to them by backpackers. The tales of crocodiles and dragons have led many visitors to refer to Ho Thuy Tien as a real-life Jurassic Park,” the newspaper said.

The water park, eight kilometers outside Huong Thuy District in the central tourist town, opened its doors in 2004 and closed down just a few months later.

In 2008, investment and trading company Haco Hue took over the water park with the aim of transforming it into an eco-tourism site, including restaurants, spas, accommodation, arts, a convention center and a space for outdoor events, but this venture continued to be abandoned.

Local authorities have once again begun a renovation project to turn the abandoned water park into a popular tourist attraction.

Renovation work costing VND20 billion ($844,100) is scheduled for completion by next March.

U.S. publication Huffington Post has listed the Thuy Tien Water Park among 10 most creepy destinations in the world, while British newspaper Daily Mail has called it “a curious and creepy site” ideal for backpackers to explore.