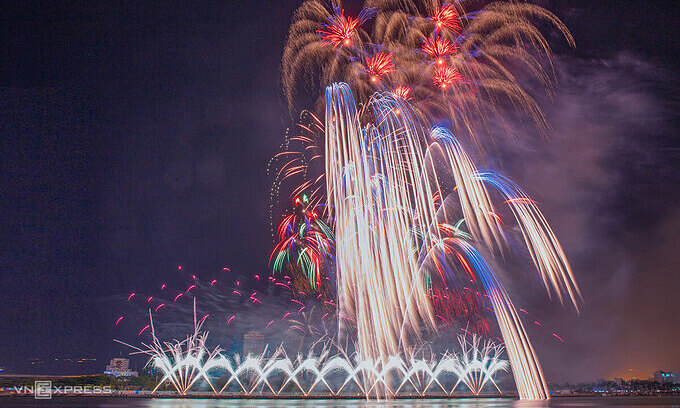 Fireworks light up over Da Nang during the Da Nang International Fireworks Festival in June 2019. Photo by VnExpress/Nguyen Dong

The Da Nang International Fireworks Festival, one of Vietnam’s leading tourism events, will make a comeback next June after a two-year hiatus due to Covid-19.

The month-long event, to be held along the Han River, will begin on June 3, according to Da Nang City authorities.

It is expected to attract pyrotechnic teams from seven countries.

First held in 2008 as a two-day competition, it became a two-month event by 2017, helping the central city maintain its status as a leading tourism destination. The festival was last held in 2019 and was cancelled in the next two years on Covid fears.

Since the country reopened its borders in March this year, the number of international visitors to Da Nang has topped 200,000, exceeding the full-year target of 180,000.

The busiest tourist city in central Vietnam serves as a springboard to access three famous heritage sites – Hue, My Son Sanctuary and Hoi An Town.