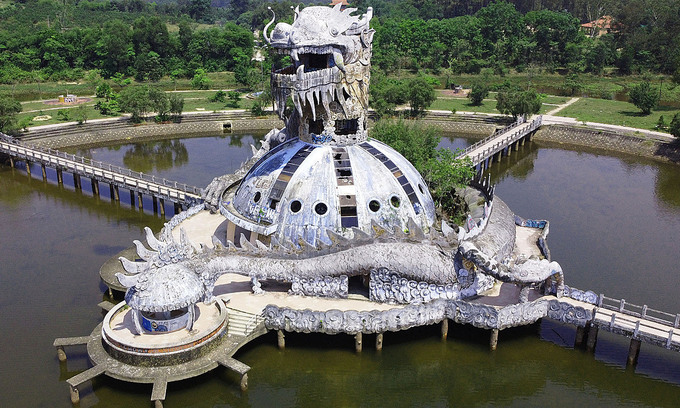 A dragon statue at an abandoned water park by Thuy Tien Lake in Hue. Photo by VnExpress/Vo Thanh

Authorities in Hue said a dragon-shaped water park next to Thuy Tien Lake will be officially open to tourists from March next year after renovation.

Nhat ordered relevant agencies to clean up thepark, improve infrastructure and repair public toilets to turn it into an outdoor public facility.

There would be camping areas and public spaces for entertainment purposes.

Renovation work costing VND20 billion ($844,100) is scheduled for completion by next March.

Funded by state-owned enterprise Hue Capital Tourism Company, the water park opened its doors in 2004 and closed down just a few months after.

In 2008, investment and trading company Haco Hue took over the project with the aim to restructure the site for eco-tourism, including restaurants, spas, accommodation, arts, a convention center, and a space for outdoor events, but later abandoned the venture.

In 2018, U.S. news site Huffington Post listed Thuy Tien Water Park in Hue among the 10 most creepy destinations while British newspaper Daily Mail called it “a curious and creepy sit” ideal for backpackers to explore.