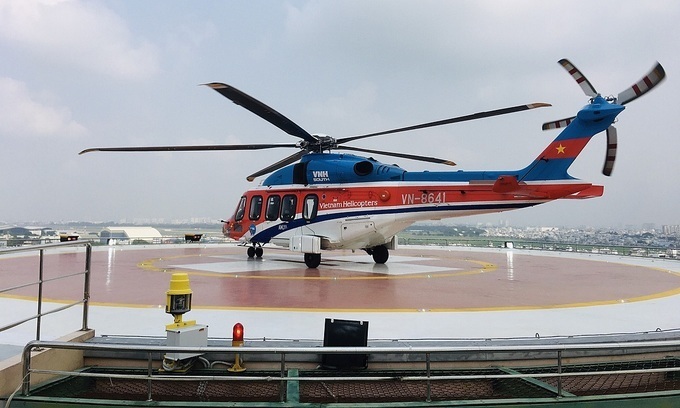 A helicopter parks at the Military Hospital 175 in HCMC. Photo courtesy of HCMC Department of Tourism

Authorities in Ho Chi Minh City temporarily halted helicopter tours of the metropolis five months after launching due to a lack of helipads.

A representative of a travel firm in HCMC said 200 guests had earlier booked the tour but the company did not know when it could accommodate them, Giao Thong (Transport) newspaper reported.

According to travel firms, suspension of the helicopter tour was due to difficulty in seeking permits to land at Tan Son Nhat airport.

For a 40-minute journey, the helicopter will depart from the helipad of Military Medical Hospital 175 or Tan Son Nhat International Airport and take tourists past destinations like Phu My Bridge, Thu Thiem Bridge, Landmark 81 and Binh Quoi Tourist Area.

The tour uses AW-189 helicopters that allows a maximum 16 passengers.

Its tourism sector has a revenue target of VND97.7 trillion.