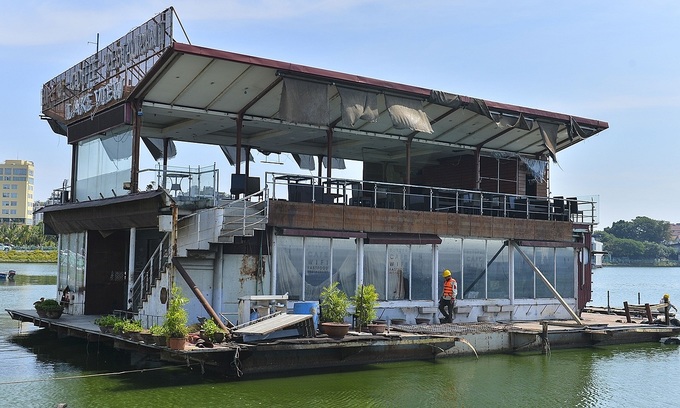 Workers check an abandoned cruise ship on the West Lake in Hanoi, October 14, 2022. Photo by VnExpress/Viet An

Hanoi authorities have begun dismantling abandoned cruise ships and floating restaurants along the West Lake to restore its original appearance.

On Friday, authorities in Tay Ho District where the lake is situated set up a barrier and sent a crane to dismantle cruise ships moored along Dam Bay in Nhat Tan Ward.

Local authorities said there were still seven abandoned cruise ships anchored along Dam Bay, all in a state of serious deterioration.

Nguyen Dinh Khuyen, chairman of Tay Ho District People’s Committee, said four cruise ships, four large floating houses and other vessels including small boats, motorboats and paddleboats on the West Lake will be dismantled by the end of this year.

“The district had to spend its own money on the dismantling,” Khuyen said.

Considered the biggest freshwater body in Hanoi, the West Lake used to be home to cruise ships, floating restaurants and other tourist boat services.

In 2016, Hanoi People’s Committee shut down a tourist dock and ordered a halt to boat services there due to their failure to ensure environmental conditions and fire prevention.

Over the past years, these cruise ships and floating houses have been left abandoned and seriously deteriorated.

The West Lake is famous for the density of historical relics, pagodas and rows of restaurants and coffee shops.

The area is one of the city’s most vibrant centers for international cuisine and home to a large expat community.